THIS IS HOW THE ARCADE SURVIVES IN 2015

Greensboro, North Carolina is a city that never actually begins. Its seemingly endless sprawl of drab strip malls and gussied-up fast food joints remind me of the years I spent driving around the outskirts of Atlanta, where the trees first give way to the exurban mass.

Before 2011, I had never even heard of Greensboro, despite living in South Carolina my entire life. And I never expected to spend any length of time there, let alone make the five-hour trek from Atlanta on multiple occasions. Yet here I am, driving up the same length of battered road for the third time, toward a destination that my best friend and I first explored more than three years ago.

By all logic, Lost Ark Videogames should not exist. It is a combination of two business models that have each died a thousand deaths in the public consciousness: half-independent gaming store, half-video arcade. It resides in a city that is notable neither for its hipness nor its population density. And its management has little-to-no interest in shifting any aspect of its image away from its own ideals of “authenticity.”

But it’s here, and as I stand between racks populated with countless obscure games I wonder how the hell any of this came to be. Luckily, I know the one person who can answer that: the owner, Daniel McMillian.

When I approach McMillian, he’s haggling with a customer over the price of a Super Scope, an accessory for the Super Nintendo Entertainment System, which hit the states in 1991. He’s wiry and ageless, and he speaks in a thick west Tennessee accent. Unlike Di Bella and Shields, he actually looks the part of an arcade owner, glasses and all. And he’s happy to see me. “Yeah,” he says, his eyes shifting furtively. “Let’s find a place to sit down.”

This turns out to be a taller order than either of us had anticipated. I had expected an “office” like Di Bella’s, but what I end up getting is more akin to a closet overflowing with games and gaming accoutrement of all stripes, from ancient circuit boards to forgotten peripherals like the aforementioned Super Scope. I pick up one particularly dusty piece of plastic—a Super Game Boy, a mostly-forgotten peripheral for the Super Nintendo—and say “wow, I’ve only ever heard of this.” And I pick up another, and another, before remembering I have an interview to conduct.

I almost didn’t make the trek to Greensboro. The drive was considerable, and I had a sneaking suspicion that McMillian’s story would ring too close to Di Bella’s to be usable. I was wrong—egregiously so.

As I interview him, it becomes clear to me that the forces that drive McMillian are entirely different. While Shields and Di Bella delivered their responses with a sort of relaxed candor, McMillian crackles with nervous energy. His words tumble out in short, eloquent bursts, using turns of phrase like “machinations of the university machine” and “we contain multitudes.” It gives an impression more befitting a James Joyce than an arcade owner. Like all good talkers, he even has a tic—he snaps his right thumb and forefinger against his hip and leg, but only when his monologue directly concerns games.

It turns out the Joyce comparison isn’t far off.

“I came to Greensboro to get a PHD in English literature. I had a crisis of faith and left the program in the 11th hour, punted, and followed my heart again. And here we are. Everyone I knew tried to gently or not-so-gently tell me ‘this is not a good idea.’ Independent games store in 2011. But I believed in it. It was me and my best friend…we worked six days a week. Then he left. And for three months I just did it by myself.”

I’m impressed. He waves my compliment off.

“Everybody who’s done something like this has a story like that. Your significant other hates your guts and all. Either it all crumbles or you push through.”

I ask if he’s still married. He answers in the affirmative, and we both laugh. He knocks on a nearby wood-paneled game console. 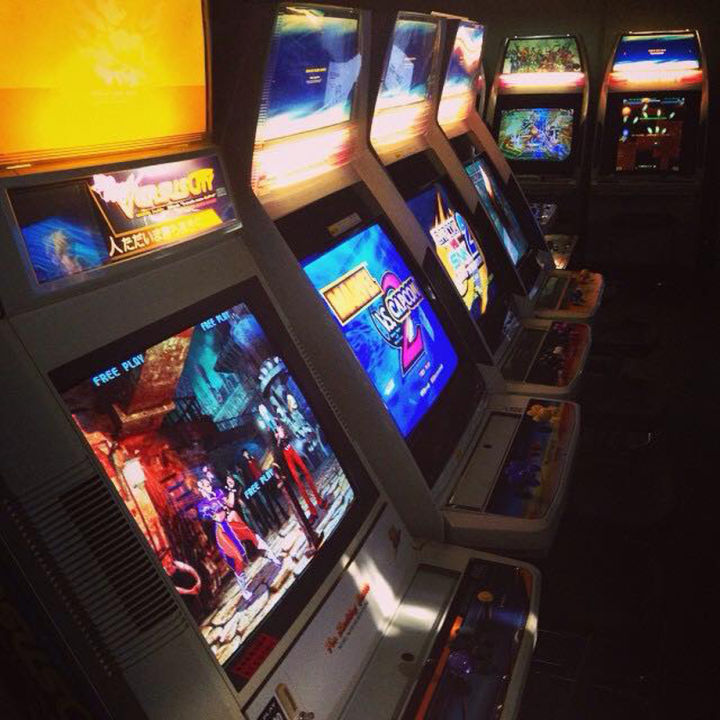 As our talk progresses, I get the sense that while Shields and Di Bella built their operations through a series of calculated decisions, McMillian’s arcade comes from a very different place—a place that was reached by passion and desperation rather than deft business sense.

“I never had a dream of running a games store,” he says, shaking his head. “I’d rather someone else run it and be in this cool place. But I do it for the arcade experience. It’s an experience I loved and fell in love with all over again. I thought, ‘This is great. I want to do something with this.’”

McMillian sounds like a man who is trying to reverse-engineer something he has lost. “Not to wax nostalgic,” he says, his eyes beginning to light up. “But, there’s something about when you went to the arcade. The lights, the strangers milling about. You elbow up to a total stranger on the machine and put in your quarter. You interact, maybe you’re opponents, maybe you’re working as a team…It’s very superficial, but there’s an energy to that interaction, because it was real. You’re really hitting on those big buttons…You can’t get that when you’re playing online.”

I just nod. I’m unsure if I’m even capable of understanding his perspective. But I certainly want to. Later on, as I walk through his arcade, I begin to fathom the depths of McMillian’s ardor. It comes through in the little things: the perfect pull of each joystick, the spotless screens on his colorful Japanese-style “candy” cabinets, the tactile pleasure of the buttons. You can sense the pride he takes in his work.

But, even considering all that, it’s the extent of his curation that most impresses me. His collection features the old standbys and the chronically-overlooked in almost equal measure—Capcom’s classic Super Street Fighter 2 Turbo shares space with cult favorites like SNK’s Windjammers and Namco’s Outfoxies.

As I sit down at his Outrun 2 machine—possibly my favorite arcade game of all time—it occurs to me that this is The Real Thing. I’m not entirely sure what The Real Thing is, but, as I drift around the opening corners of Outrun’s beach stage, I know that this is it. This is how the arcade survives. This is what McMillian was talking about.

About the Author: admin